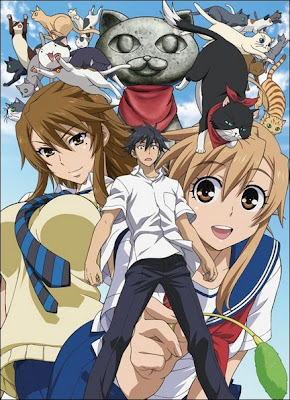 This will probably be one of my shortest reviews of a series but that's mainly because I don't have anything bad to say about it and I don't have to defend any kind of reasoning to watch it. It's just a fun and adorable little series. Everyone I've recommended this to has enjoyed it so let's move on to the review.

To give you an idea of how this starts:
Kosaka Junpei (Or Junpei Kosaka depending on where you're from or how picky you are) is heavily allergic to cats. His Mother and Sister are apparently horrible people because they don't seem to give a shit. They own a cat and treat it better than they do Junpei almost out of spite. While walking home from high school, Junpei kicks a can in the hopes of getting it into a nearby trash can. What a guy? Most would just ignore it. Guess how he gets repaid for his good deed? The can defies all laws of gravity and physics and breaks the head off of a cat statue (see picture above). Wow. He quickly finds out that the spirit of the cat statue has put a curse on him. How does he find out you ask? He comes home and finds his cat talking to him. He learns the harsh reality of his situation. If he doesn't grant 100 wishes to different cats, he'll slowly turn into one. You might think, how cool is that? But then you'd be wrong! Do you not pay attention? This guy is allergic to cats! He'll die if he turns into one. That sucks. A lot.

This series falls into the romantic comedy genre and technically harem genre as well. You're probably thinking, NOT ANOTHER HAREM! Don't worry my friend. You can settle down. This isn't like most but I'll get to that last so just trust me for now. There are a lot of good things going for this series.

First of all, it has cats. You're probably thinking, but Ky, I hate cats! Well, these will prove you wrong mister. These cats have major personalities and steal the show a lot of the time. Nyamsus and Tama could have their own show but they instead play major supporting roles to try and help our main man Junpei make it through this shit storm he has stumbled upon.

Second, the comedy is top notch. This is one anime that doesn't fall into the same comedy routine like I see too often. The story takes some unexpected turns at times to ramp comedy up as well as keeping you on your toes.

Fourth, it isn't your typical harem. There are parts where the other girls decide to stop trying to be with Junpei or they give him a break and try to help him get the girl he actually has feelings for. I've never seen that in a harem.

Go watch a couple of episodes. See what you think. What's the worst that could happen? You get a few smiles out of it? Oh no, how terrible.
Posted by Kylak at 1:14 PM