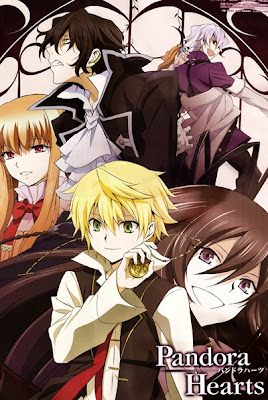 Who is it for?
Fantasy and mystery fans need to jump on this now. Alice's Adventures in Wonderland and Through the Looking Glass fans have already watched this twice.

Chain - A being that lives in the hellish Abyss and can only live in the human world after making a contract. Much like Dick Cheney.

Contractor - The human who makes a contract with a chain. A seal is placed over their hearts with the symbol of a clock. If the clock hands move full circle, the contractor will die. Much like the true conspiracy behind Heath Ledger's death.

B-Rabbit - Black Rabbit. B-Rabbit is the nickname given to a very infamous chain who's name is in fact Alice. It's not about the street cred.

How it begins:
Oz Vessalius is a carefree and intelligent young lad and he's turning 15. Apparently if you're in a Duke family, 15 is the age to be. A coming of age ceremony is being thrown for him and things seem fine and dandy. Oz invites his servant and best friend Gilbert to the ceremony even though it isn't normal procedure and Gil gets all misty eyed. Before the festivities begin, trouble starts to brew. Without revealing the events that lead up to it, the party quickly becomes Oz's demise as he is sent to the Abyss. Gosh I do miss those days; growing up and getting sent to the Abyss. You know, the good old days.

Oz meets Alice in the Abyss and they make their way back to be introduced to a group known as Pandora. They find out that it just so happens making contracts with chains is ILLEGAL. Oops? So things start off with Alice needing to find her lost memories, Pandora researching the Abyss, other groups intervening, the mystery of all the events that occur throughout the stories timeline as well as the mystery of who the Baskervilles are, and Oz being thrown into the middle of all of this and having to work for Pandora and assist his chain Alice. It sounds pretty ordinary right?

What rocks?
The characters are dynamic, have great character designs, and are very intriguing.
The story is a weaving of mysteries that the main cast is tasked to solve.
The music is something to look forward to each episode.

What sucks?
Fight scenes are honestly kind of bland at times. Sorry, action fans.
The last few episodes are rushed and honestly kind of terrible.
The story doesn't conclude. The Manga continues the story though.

Overall:
I enjoyed it heavily. I recommend that everyone watch it. The only thing is that if you want to finish the story, you'll have to continue it in the Manga. So rather than this feeling like a series, it feels more like the greatest introduction to a Manga conceivable.

I was trying something different this time. Let me know what you think. SOUND OFF IN THE COMMENTS!

This is Kylak signing out.
Posted by Kylak at 3:53 PM