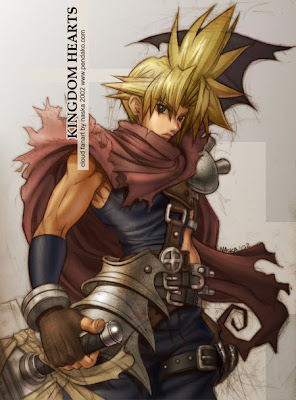 While the first two Critical Playtests were all about classes that don't get enough attention, this week is dedicated to a class that happens to be exclusive to Dungeons and Dragons 4th Edition. The easiest way to sum up the Avenger is a Jedi Knight but that's only a half truth. Avengers are the Divine Striker class that are all about separating their target from the group. Whether you like being a mysterious warrior, a divine ninja, or just wielding a giant freaking weapon, this class is for you.

Normally this is the part where I tell you what the competition is. I would tell you what the other Strikers are known for except that's a giant list that would take quite awhile to go through. Sorry folks. Let's just skip on into what makes an Avenger stand out shall we?

1) Accuracy - Oath of Enmity is what it's all about. You get to roll TWICE! You get to roll TWICE! Sorry for repeating but it fills me with so much joy I had to say it twice. Do you understand how insane that is? You are twice as accurate as anyone else. There are some rules to get this double roll however so strategy is still involved. I should also mention you even get a power to let one of your ally's reroll.

2) Isolating - This is what the Avenger does best. Avengers are all about going toe to toe with someone and isolating them from the rest of the hordes of enemies. Many of their powers force enemies to separate so you can pull this off. It's almost like force push and pull.

3) Defense - Not every Striker can say they have Defender level HP or ways to be sticky. You're rather awesome at both and you don't even wear hefty armor (you get a bonus for not wearing the extra armor and their are feats to boost your AC instead). You can take hits with the best of them and hold your own in a fight. You even get some tasty utility powers so you can keep getting back up.

4) Maneuverability - Strikers are known for this quality but let's talk about how the Avenger pulls this off. Since the Avenger is based around having a target and keeping track of that target, many of your powers give you free shifting or even teleportation to stay with your target (but only your target).

5) Damage - Avenger's don't honestly bring out the damage you would think. The way an Avenger pulls off having Striker-level damage is their consistency. Thanks to the accuracy I mentioned earlier, you'll hit more often. Hitting more often means more damage even if you're doing less per round than Ranger Smith over there. Getting the chance to roll the dice twice to hit also means twice the number of chances for a critical hit.

6) Divine - Being a Divine class is awesome. You get Channel Divinity feats, Domain feats, and you're based around Wisdom so your perception is insane. Plus, it's simply fun to roleplay.

"And shepherds we shall be,
for Thee, my Lord, for Thee.
Power hath descended forth from Thy hand,
that our feet may swiftly carry out Thy command.
So we shall flow a river forth to Thee
and teeming with souls shall it ever be.
In nomine Patris, et Filii, et Spiritus Sancti."


This is Kylak signing out and suddenly in the mood to watch Boondock Saints again.
Posted by Kylak at 9:54 AM