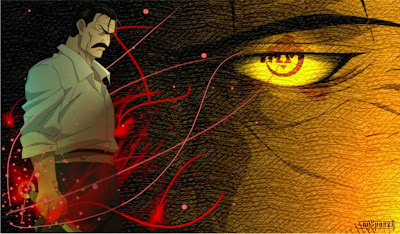 Faylar specifically requested this and Joe said a Battlemind article would help him out as well. Consider it done.

The Battlemind of Dungeons and Dragons 4th Edition is not just a blend of tank and psionics. The Battlemind is a recipe consisting of repositioning, flexibility, speed, and quite possibly cinnamon sugar.

There's no need to break down the competition because I was one step ahead and managed that in my Fighter article. Speaking of being one step ahead...

1) Before it even begins - You are unique among classes in that both of your Psionic studies are in fact tailored to the beginning of an encounter. You are ready to take advantage of the first moments of the battle before anyone else.

2) Speed - You're probably the quickest on your feet of any Defender. You're able to keep up with anyone who dare attempts to shift around you by merely giving up your opportunity action that round. They can't outmaneuver you if you keep this up and there are plenty of other powers in your arsenal to shift, teleport, and strike before they knew what hit them. The Battlemind is all about tactics and repositioning yourself constantly to make the best use of your different powers.

3) Defense - Are you ready for this? Constitution is your main stat no matter what build you make. That means your HP is literally the second highest in the game. First place still goes to Warden but you still outweigh the rest of the competition. You've also got every armor proficiency other than Plate. Even better is the sheer number of powers that allow you to change your body's aspects. These aspects grant a variety of benefits such as temporary HP, healing surge uses, resistances, as well as always adding an interesting and powerful offensive benefit to boot. Another unique trait is that you get a +2 to Will defense and your secondary stats help your Will defense as well. Defenders usually fall prey to crippling control effects that target this very stat but not you my friend. Some of your aspects are the equivalent to Colossus from the X-Men but others might recognize certain abilities that are suspiciously similar to another popular character...

4) Flexibility - You've got a tool for every job. Your mind is the swiss army knife. Just to run through a few examples: You can change your weapon to take on insubstantial enemies, you can change yourself to ignore difficult terrain, grant allies invisibility, you can change a melee attack into a ranged one, and so much more. Another interesting thing about the flexibility of the class comes in the variety of builds that are possible. There are literally a minimum of seven archetypes already and this class has only existed for a few months.

5) Repositioning - Of the Defenders, you are king of repositioning. You and the Bard can squabble over who is better at this. It would be considered cheating in Chess to be allowed to move the enemy pieces but that's exactly what you do. Sliding, teleporting, pushing, and pulling your enemies and your allies to have control over the battlefield. I've already explained in the Bard article a handful of reasons why this is amazing. Take a look there if you haven't.

6) Psionic Augmentation - What separates you and the other Psionic classes from other classes in the game is your augmentation. Psionic classes don't get Encounter powers and they don't need them. Instead, you get a giant pile of different At-Will powers as you progress in levels. You also have a certain amount of power points that you regain at every short and extended rest. You can spend these points to augment your At-Wills to basically make them the equivalent to an Encounter Power. The beauty of this is you get less powers to choose from overall but more reliable powers in the long run. You also get more At-Wills than non-Psionic classes do so you can have fun manipulating those At-Wills and powering them up whenever necessary.

(It should be noted the Monk is the exception of all Psionic classes. It does not have augmentation with power points and it still has Encounter Powers.)

7) A different kind of defending - This is actually more of a WARNING then it is a bonus and yet it's still a unique trait. The Battlemind's class features are rather weak in comparison to most Defenders so you can't rely on them like a traditional Defender would. You will be utilizing your powers in place of these class features since many of your powers also punish or work with your Marks. As stated before, you've got to actively reposition yourself, enemies, and allies to utilize your Defender effects and powers to the best of your ability. The good news is, the Battlemind has the tools to pull this off.

EDIT: Errata in July says that Blurred Step is now a free action. That makes it ten times better which increases the power of the Battlemind immensely.

This is Kylak signing out and playing Chess horribly wrong thanks to this class. What do you mean I can't move your Knight diagonally to attack your Queen?
Posted by Kylak at 5:17 AM