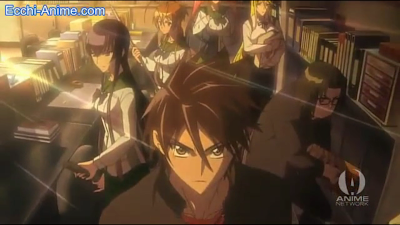 The episode starts off with news channels reporting the pandemic going on across the globe. Saya and Shizuka compare the widespread infection to famous plagues and Kohta points out that the difference now is that the dead continue to move and spread the disease. This essentially means the outbreak could spread endlessly. Endless parties people. I'm sure we're all glad about that news. I honestly don't know how this series can end happily if it only took a few hours for the entire world to go into chaos and the zombie outbreak to already have seized enough lives to the point that news broadcasts get cut off. Doing the math with how quickly these things seem to multiply, the show should be over in a few episodes right?

Our group makes a plan to head through the front gate and make it to a bus for escape. On the way there they manage to come across another group of survivors. The group then exploits the only weakness these corpses seem to have. This brings up my confusion of why the zombies don't attack each other if only their sense of hearing seems to be working. Their eyesight has already been proven to be labeled legally blind, their sense of smell can't work or the zombies that Takashi gets too close to would have already come after him, and we know their sense of touch is utterly useless as that's part of the reason they're so tough. Their nerves are literally dead so they're rather stiff (hence their slow speed) but they can take a beating and their strength is increased.

Anyways, Takashi pulls through and just as the entire group is almost out of the building, someone has to screw things up royally. Takashi and crew make a run for it to the bus and make it their in one piece. Our other survivors become a tasty buffet for the zombie swarm. One final group of stragglers rushes forward and we're introduced to the biggest scumbag I've seen in an Anime in quite some time. Shido is a piece of trash that I imagine will be the source of much displeasure for the coming episodes. Rei obviously knows and despises the guy and sadly no one listens to her when she literally suggests they should leave them to die. It's moments like these that only happen during a zombie apocalypse. Shido can be seen below with one of his many scummy faces. 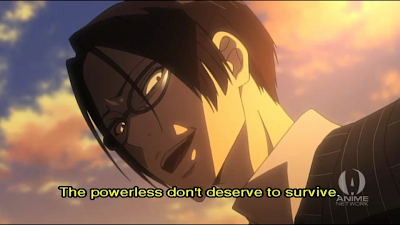 After democracy dies a little on the inside when the other students elect Shido as their "leader", Rei ragequits and jumps out of the bus. Takashi follows and then plot inconvenience arrives in the package of a bus filled with zombies. The bus flips and crashes with Takashi grabbing Rei and diving into the nearby tunnel. The bus slides and blocks the path of the tunnel (as improbable as that sounds). Takashi yells to Saeko that they'll meet at the police station around 7PM.

Takashi and Rei finally run head first into some luck by finding a biker zombie! What I mean is, a zombie that was formerly a biker which means there's a bike nearby for transportation. Before the credits roll we get some grim foreshadowing from Takashi.

As a side note about characters: Kohta has grown on me a lot. He's such a likable guy. He's beyond polite to Saya even though she's extremely brash and rude to him and he pulls through with his marksmanship skills every time. Shizuka has earned a little respect from me since last time but I'm not going to get into all of the Shizuka business because I could write an entire article about just her.

This is Kylak signing out and not wearing a towel around my neck. Watch the episode... you'll get it.
Posted by Kylak at 7:58 PM