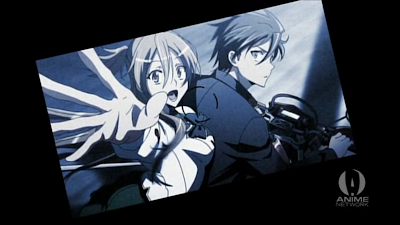 What a shame! I thought this Anime was going to do well from start to finish but we got our first forgettable episode. Almost half of this episode is literally recaps and the other half is mostly one major scene at a gas station that I could have personally done without.

I will admit that there are reasons for episodes to have piles of recaps but that doesn't make it any more comforting does it? I almost don't want to spoil the gas station scene except then I wouldn't really have anything to review now would I?

Motorcycles don't run on dreams and so Takashi and Rei pull over to a Gas Station. Some thug is hiding in the shadows and watching the two of them and eventually makes his move once Takashi goes inside the gas station. After grabbing Rei from behind, he puts a knife to her throat. Takashi tries to reason with him multiple times but nothing gets through. And we get a rather awkward and unwanted groping scene. In the end, the guy gets what he deserves and is not only shot in the chest but is left to be slowly mangled by the incoming zombies.

I realize that this series really wants to delve into the struggle of humanity and raise the topics of not only man vs zombie but man vs man but I'm slowly getting pushed away from all of it. It's hard enough to deal with just Shido and his flunkies but then we have the ultimate bully immediately after their introduction. The series is hoping to be a pile of cake that you want to enjoy but it's handing you three layers of shit that you can't stand. I'm no Chef but I highly doubt that shit is part of the recipe of a good cake. There is a distinction between characters you love to hate and characters you despise and would have preferred were never created.

This episode isn't a total loss and there are many aspects that were rather necessary for the progression of the show so you should still sit down and watch it albeit you may need to skip around... a lot.

Site note: Shaun of the Dead reference since the Gas Station is literally titled "Shaun".

This is Kylak signing out and realizing that ninjas would survive this particular zombie apocalypse by default due to the lack of noise they make.
Posted by Kylak at 3:40 AM