Wicked Reviews Series: The Legend of the Legendary Heroes - Episode 1 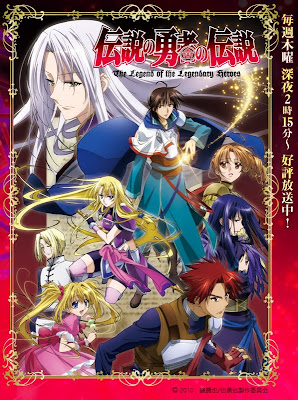 For those who don't know me, I get extremely giddy about fantasy adventure Anime. The sword and sorcery and high fantasy subgenres excite me to no end so I'm all about this Anime regardless of how funny the title is. To get an idea of what this is, this series is known as an "anti-heroic fantasy". It means exactly what you would believe it to mean. These characters aren't heroes and they prove that in the first episode as it is.

Our three main characters are:
Ryner - resident mage and possessor of Alpha Stigma eyes which might as well be replaced with Sharingan. For those who don't know what I'm talking about, this means he can read and copy magic. Ryner doesn't seem to want to be searching for artifacts at all and he hates his partner Ferris. He also happens to be the butt of many jokes so far. I honestly feel rather bad for him since he's the most likable character in the first episode.

Ferris - swordswoman and resident badass. She's obsessed with dango (a Japanese sweet) and seems to practically live for the stuff. She constantly abuses and picks on Ryner and considers him inept and ignorant. Not much is known about her yet except she happens to have quite the sense of humor and a strange outlook on life.

Sion - new emporer of Roland and resident "pretty boy" since all women seem to flock to him. He seems to have grand plans for taking over the entire world but on the outside appears to be the most caring and kind of any ruler known to man. The guy goes out of his way to reunite a brother and sister even after the brother made a mistake and tried to assassinate him. What a guy.

The story switches back and forth between the adventures of Ryner and Ferris one moment and then jumps over to check in on Sion. It's a nice contrast of humor and action to seriousness and intrigue. Ryner and Ferris are wandering about as they attempt to find artifacts by order of Emporer Sion and they happen to hate him for that. Rather than full on introductions to other characters, we are given peeks into them which is a much safer route than what many other shows this season are trying to pull off.


For those that wanted me to actually give a summary of the first episode:

In the past, things sucked a lot. Ouroboros Demons were ruining everyone's shit and stomping on babies. No one stood a chance. Then a Legendary Hero appeared. Regardless of being Legendary, they don't tell you who he is. He was apparently broken and able to defeat every last demon single-handedly with the power of irony since he used the power of the Ourboros to defeat them. It appears he had Sharingan eyes, err.... I mean, Alpha Stigma.

Switch scenes to Ryner taking on a group of soldiers from Nelpha. They recognize his Alpha Stigma and claim him to be a monster and spy for Roland. Ferris interrupts Ryner's defense and claims Ryner to be too stupid to be a spy. She then steals the show and takes out the soldiers by herself in mere seconds. Then Ferris abuses Ryner before the two depart to find Ferris more dango. Insert Ferris's delusions that the dango speaks to her about Sion being an evil bastard.

Jump back to Ryner and Ferris who have found a temple... dungeon... thing with traps included at no additional charge. We're introduced to a rather annoying group who's Captain, Milk (yes, that's her name), manages to set off every possible trap conceivable, by accident, much to Ryner's dismay.

Back to Roland where a boy spots the carriage of Count Clausbell and makes his move to stabbity stab. Just one problem: Sion happens to be riding the carriage. So the boy gives up on finding his sister since his life is now forfeit for attacking the Emporer. Sion steps in to reassure the boy that they'll do anything they can to reunite the brother and sister and to never give up hope. What a guy.

Ryner and Ferris ignore Milk's claims that they are using illegal magic and literally walk off while she babbles on to the point of biting her tongue. Plenty of jokes ensue from the group dynamics going on here and then they trigger something that releases some kind of floating guardian with death beams. Ryner determines with his Alpha Stigma that the enemy has no weak spots unlike most bosses found in Legend of Zelda and so they form their plan of action: GET THE HELL OUT OF THERE! RUN!!

Sion and Count Clausbell meet at a party the Count is throwing to discuss Sion's inexperience as ruler before Clausbell walks off. Just as he's made some distance, Sion declares him to be trash with a very evil looking glare. Hmmm.

As the guardian of the temple blows up everything to dust, Ryner and Ferris decide to just go back to their job and they leave the beast to float about and destroy the mountainside. I'm sure things will just sort themselves out.

Then we get a flashback sequence of Sion telling Ryner that he'll become Emporer and fix everything. Then a transition to a scene with a crimson sky, someone crying, dead bodies, and Ryner saying the word, "worthless". Dun dun duuuunn.

Production values seem to be high, action scenes are fun to watch, there were some decent laughs, political intrigue, interesting characters, and more to get swept up in. There's even talk of romance and what not, even if it's been used as humor so far, for those that are curious. I have high hopes for this series and I'll definitely be reviewing this the whole way through.

This is Kylak signing out.
Posted by Kylak at 7:02 AM