Wicked Reviews Series: The Legend of the Legendary Heroes - Episode 4 Trying out something different this time around so let's see what you guys think.

Sion plays the ultimate game of russian roulette with Ferris's brother (Lucile). Lucile's bullets are instead questions, if he doesn't like the answer, Sion's head will be ripped off before he can even blink. Consolation prize? It's so fast that he won't feel the pain.

We're introduced to the kindest prison guard ever who takes care of simple requests for Ryner. Ryner and the Prison Guard become rather close over the years and they both agree that war is a terrible thing. There's a giant pile of touching moments here and it's definitely worth the watch.

Ryner is let out to be taken to his execution and Ferris happens to be his escort. After an attempt to break free, Ryner is presented to the King of Roland. Much to Ryner's shock, it happens to be Sion. It would appear he didn't get the consolation prize. 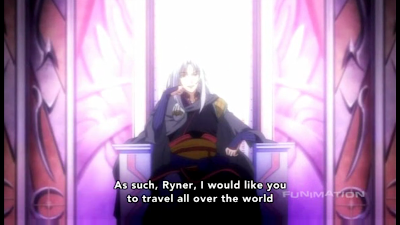 Sion defies all laws of time and space by not only showing that he already has Ryner's report that he left in his prison cell but that he's already read it. Apparently, Sion actually enjoys the contents which involve using Artifacts made by Legendary Heroes of the past and having that combined power to be made into a deterrent to stop war. Sion presents a very persuasive deal for Ryner: Find the artifacts or be executed. Since he believes that Ryner will slack off too much, he forces Ferris to go with him. Lucile's voice in the shadows are enough to get Ferris to grab Ryner and get out as fast as possible. This marks the beginning of their journey.

This is Kylak signing out and hoping that a Kingdom of Afternoon Naps is possible in this series.
Posted by Kylak at 10:38 PM