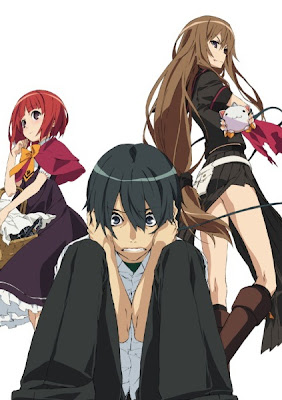 Finally the summer season of Anime is upon us and I'm here to check out a shit TON of different shows coming out. So here are my impressions on the first episode of Ōkami-san to Shichinin no Nakama-tachi. That roughly translates to Ōkami and her Seven Friends.

To warn you ahead of time, I have some very mixed feelings on this one after watching.

It's supposed to be a parody series but the majority of humor is rather stale so far. Given, this is just an introduction episode but there were only a couple of actually laughable moments and I'm known to laugh at quite a lot.

The one thing I worried about before going in to this is whether or not there was heavy amounts of lolicon. Apparently my fears were made true. For those who don't know, lolicon sickens me. I continued to press on regardless.

We're introduced to all eight of the main characters in one episode. That's quite the undertaking. The main three are the characters modeled after The Big Bad Wolf, Little Red Riding Hood, and The Hunter. Ryōko Ōkami (Wolf), Ringo Akai (Red Riding Hood), and Ryōshi Morino (Hunter) are our main three and yes they had to make it extremely annoying by giving them all names that started with R.

The show starts off with Ryōko and Ringo chasing after some random guy in a purple shirt. I don't think he ever got a name so I shall designate him as Stalker Bitch. Our resident super loli Ringo blackmails Stalker Bitch with photos they have of him being an uber creep. Stalker Bitch screams out about his ownership over the girl and pulls out a knife. High schoolers settling arguments with knives? Seems pretty normal. Ryōko realizes things have to go down the hard way and busts out her kitty gauntlets. They're basically mechanical boxing gloves with faces of kittens on them to leave quite the embarrassing mark after landing a blow. A rock flies from behind the girls to knock the knife out of Stalker Bitch's hand and Ryōko decides to finish the guy off despite being peeved that someone else stepped in to help.

The girls head back to their club at the academy which is titled the "Otogi Bank." Basically they're like a mob. They take on any job and offer their help but in return they require steep payment back. We're introduced to these characters rapid fire so I can't offer up more than telling you there is a President, Vice President, Maid, and two random other people that were in the show for about two seconds... literally. The President and guy who was being raped for about two seconds by a little girl, are the only guys in the club and so they decide they need a new guy added to the team. Conveniently, when Ryōko and Ringo leave, that very guy introduces himself. He's apparently has different phobias that make him beyond shy and unable to handle being stared at. Because of this, he lives his life in the shadows. A semi-ninja? Okay, I'm listening. He is infatuated with our lead female character Ryōko and barely has the nerves to tell her and admits to "following" her for some time now. Two stalkers within five minutes of the show beginning? I kid you not. So she hates his guts for being a pussy because she's the resident bad ass and he's left in the cold. Ringo thinks it's great that a guy finally sees something in Ryōko and wants them together and very quickly somehow manages to bring up an entire profile about him in mere moments on the internet later.

We jump to the next day where Ringo is introducing the potential candidate who happens to be... right beside her. The Otogi Bank sees promise in him but Ryōko is a grumpy beast that will have nothing to do with him and she storms out. Immediately there is a client which the maid sees to while the rest watch over a video screen. Then some random joke about the maid having a fetish for people wanting favors or some crap. That's supposed to be some kind of joke... does anyone find that funny?

This girl (Kakari) is head over heels for a certain Tennis player (Akihiro) that she watches and because of his injury, he's going to quit. She thinks he'll regret it later so she wants the Otogi Bank to step in and get the paper from him.

You couldn't just talk to him? You got the equivalent of the mob to STEAL a paper from the guy with the broken leg? REALLY?

They send out Ryōshi to prove his man-hood and get Ryōko to warm up to him. This fails utterly. Akihiro gets the papers signed that he needs to quit. They come up with one last ditch effort which manages to introduce the last character... Majo. It's a terrible pun since her name literally means Witch and she's dressed like... just take a wild guess, I give up already. Majo is the mad scientist of the group and designs a bicycle with a pumpkin carriage? I'm not really sure how that's supposed to help in the slightest and it really doesn't do anything beyond trying to be a random tie-in to the Cinderella story.

Ryōshi wants to take Kakari since he wants to make up for his mistake but he believes that she should be the one to talk to Akihiro about her feelings. Due to his fear of being stared at, he won't be able to ride the bike in public but Majo comes up with another brilliant plan... TO COVER HIS EYES! *bashes his head into a door until it breaks* That's right, cover the eyes of the guy who's riding the awkward bike with a giant carriage attached. I guess the term mad scientist in this anime means ignorant nut job.

Kakari screams out directions to Ryōshi so they don't die on the way there and then when they begin to close in on their target, Ryōshi finds out even more brilliant news: the brakes were never installed. So after having to take off the blindfold to look for the brakes he sees people staring at him and flips the bike which launches Kakari who then does a forward flip and kick dismounts off of Akihiro's face. The Otogi Bank shows up to get rid of the document needed to quit and then gets everyone out of there. The only thing left is Kakari's shoe. Guess where this one is going.

We have an aside to focus on our actual main characters for a couple minutes. Ryōko and Ringo are walking along and Stalker Bitch shows up with two of his friends. He's also brought along a handy lead pipe to bash Ryōko's face in with. What a cheerful guy. Fight ensues and before Stalker Bitch can sneak in a pipe to the head, Ryōshi jumps in as a human shield. Ryōko finishes the fight and yells at Ryōshi for doing such a nice thing. Ryōshi explains that he wanted to step in and take them out for her but his phobias prevented him from getting close so all he could do was be a shield for her. Insert sappy expected moment and then we roll to credits.

After the credits we get a nice little short which was one of the only funny and adorable parts of the show. Akihiro still had the shoe and, just like in Cinderella, tries to find the owner by having them try on the shoe and then KICK HIM! This guy is awesome! So all the girls give sissy kicks until Kakari's turn comes up. She gets a freaking head start and then does yet another flip and kick to the face. Akihiro yells AGAIN! a few times until satisfied. The two live happily ever after.

That would be adorable until you realize the fact that he had the shoe of a girl who flew from nowhere and knocked his ass out. He was unconscious when the others took the paper. There was nothing implying that the girl who knocked him out saved him from regretting his decision to quit the Tennis team. So he was just trying to find a girl who could beat the crap out of him? Maybe... that wasn't implied either but when you reflect on the episode, that's honestly what was going on even if they want you to believe he was looking for the love of his life that helped him change his decision.

So as I said, not a lot of jokes just yet since it attempted to introduce the entire main cast in one episode as well as several side characters and today's client but I'm sure they'll be coming. Things that bugged me include: the narrator who was unnecessary and annoying and the horrible bath scenes.

I'm going to take a moment to explain this. They are FIRST YEARS in a HIGH SCHOOL. They are around the age of 14. I don't need a shower or bath scene showing off little girls bodies. I get that there is some weird shit going on in Japan with this lolicon fad and that will be saved for another article but jeez. I wanted a romantic comedy, not a creep fest.

Like I said, I have mixed feelings. I can see the potential and I'm going to give this thing a shot and try to continue watching it but right now I'm shaking my head.

This is Kylak signing out.
Posted by Kylak at 9:29 PM