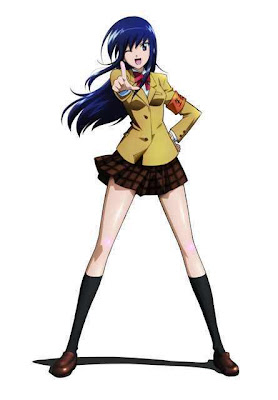 The short version: A school council comedy anime with lots of dark and ecchi humor.

The long version: It's Takatoshi's first day at a different High School. This High School was previously an all female school and is trying to adjust to the change. Takatoshi is spotted by Shino, the President of the School Council, immediately upon his arrival. She quickly assaults him with the rules and her strictness. The other two members get introduced shortly after and the group dynamics start to roll quite smoothly.

The jokes are definitely hit or miss but there were plenty of hits so that's definitely welcomed by me after seeing so many comedy shoes fail at every attempt. Here's a good example where the student council is giving Takatoshi a tour of the school and Shino explains the bathroom situation ever so casually:
"These are the girl's bathrooms. Boys are to use the faculty bathrooms. Here is where I release my bodily fluids and change sanitary napkins."

My verdict: I'm slightly on the fence here. While I actually thought this was the best first episode of the three shows I've reviewed for this season, I'm not normally one to enjoy ecchi humor. It was worlds apart from what I'm used to ecchi humor being so that's a plus but I also realize that if the show only has that going for it, it could get old pretty quick. So I already have some assumptions to play with but for now I'm going to continue with this and see how things go. It's obviously well made so far and I'm curious to see how things go. I'll continue reviewing this for now though so stay tuned.

This is Kylak signing out.
Posted by Kylak at 2:27 AM