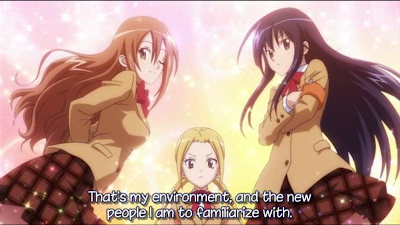 I'm multiple days late on this so let me get the apologies out of the way. I had to watch the episode again just to refresh my memory. So let's jump into it shall we?

Right from the get go, we're given formal reintroductions to the cast from the main character's point of view. The President Shino is amazing at literally everything but she's a perv, the Secretary Aria is the gentle motherly type but also a perv, and then there's Suzu who has an IQ of 180, can speak multiple languages, is capable of doing calculations of around 10 digits in her head, and is literally a prodigy but happens to look like she should be in elementary school.

Our main character has been in school for a month now (We jumped rather far ahead in just one episode) and we're introduced to Mutsumi who sounds like the voice actor for Maka from Soul Eater (I should look that up later). She's a martial arts fanatic who wants to start a club so she asks our main character, that I forgot the name of (it's Tsuda but yeah... I did forget), to help her out. The requirement to start a club is five members but Mutsumi would prefer their club be the exception to that rule at four members due to stretching partners needing to be in pairs. Shino ponders upon it and then decides to make them an exception to the rule and by that she means they have to have six members to found the club. Ouch. 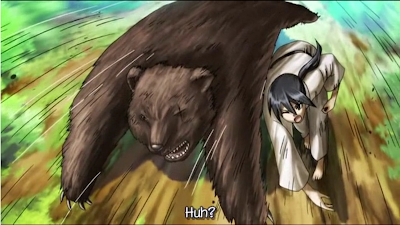 Then we find out about midterms coming up. Student Council members have to be in the top 20 and our very average main character gets depressed since he doesn't think he can pull it off. Wait a second... average main character, not good with school work, black hair... HOLY CRAP! That literally describes our main characters from almost every show this anime season. Wow... the ship is sinking folks.

Tsuda tries to get help from each of them and hilarity ensues.

Lots of typical High School Council jokes mixed in with Shino and Aria being complete pervs (in the most casual and oblivious way). Then the group has to move boxes. BOXES PEOPLE! Boxes with things inside them no doubt. Wake up! This is going to be action packed except not at all and I'm just getting you excited for no reason... sorry. There's a few good jokes here and we're introduced to Narako. Say hello everyone. She's the teacher from the opening sequence and the supervising teacher of the student council. Buuuuut she's never around so everyone in the council forgot about her existence and they treat her as if she isn't a teacher due to her maturity level. Burn.

I've gotta give credit where credit is due. This show is simply amazing with its use of angled shots, facial expressions, and changes in style. The comedy is still hit or miss so far but it's still a good ride the whole way through. I honestly don't know how the voice actors pulled this off because if I had to say their dialogue, there is no way I could say it without bursting into laughter myself and yet they say every line ever so casually. 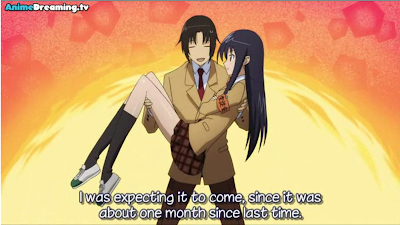 Then we find out that the second years have to go on a trip and so our third years (Tsuda and Suzu) will be left in charge of the council. CLIFFHANGER ENDING!

This is Kylak signing out and taking care of three student councils that are run by grizzly bears at four different colleges (figure that one out). It will be the hit comedy/drama of next season's Anime. Truly.
Posted by Kylak at 11:30 PM