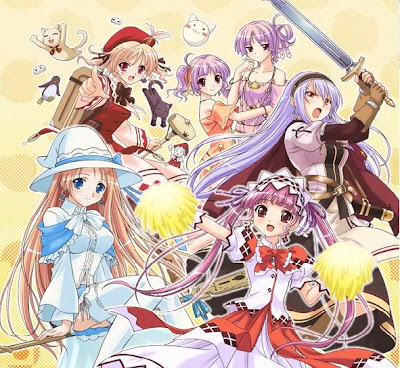 The short version: RUN! RUN WHILE YOU CAN! THIS IS UTTER CRAP!

I wouldn't be judging things so harshly if it wasn't for the fact that this is the summer season. Shows are going to be extremely short and they need to catch my attention fast.

The long version: This show doesn't have an identity.

We have yet another show that barrages us with the entire main cast in the first episode. How rude! Basically, most of the cast only gets a few lines and the great majority don't even know each other so there isn't any reason given why these characters meeting for the first time would actually continue to hang out with each other or spend time together. Apparently, even though they're all strangers, they all have a fascination with Leicester (the only male) which is kind of creepy since one of them is his mom. So yes, this is a harem. It gets even worse when you think that he doesn't even seem to be the main character and I'm not really even sure who that title goes to yet.

You know how most Anime have that one character archetype who happens to be super cutesy, blushes all the time, and is sometimes drawn chibi or with the crayon outline for humor? Imagine the entire cast being like that. No seriously, imagine how horrible that would be. That's just a TASTE of this series.

All of the characters so far are overused stereotypes. That may change later on but for now, none of them have something that makes them stand out. The setting, the character designs, the personalities, the quirks, the everything. Nothing has an identity of its own and it makes it difficult to watch.

The episode in a nutshell:
A random scene of a girl floating and talking with a shadowy motherly figure that discusses the girls purpose for being created. Weird...
Skip to us getting dragged along with Leicester and Carina who randomly go out for the day and stumble upon a handful of new people within 15 minutes and continue to hang out with them for no adequately explored reason, even if they are creepy stalkers who want to get in Leicester's pants. Everyone seems totally okay with this. They just collect more people after bumping into each other until the last few minutes of the show where the girl from the very beginning is finally introduced after a meteor shower. End.

Literally, that's the whole episode. Nothing else happens and all of it just feels like a rush to get every character introduced and staying together to create some laughs out of their interactions but what makes it even MORE awkward than it already is, is that these interactions are one on one even if there is a large group. Other characters just stay off to the side and remain quiet when it isn't their turn. While the group is together, conversation is almost always directed at a single person. This works well at first when only three characters are together at any given time but fails later on when we have a cast of literally nine before introducing the girl who might be the main character at the end of the episode which would make ten total.

I looked into this to find out that this show is apparently based off an eroge visual novel but the Anime itself will be a clean adaptation. This might explain a lot really. It still hurts regardless. There is no guarantee that I'll continue watching or reviewing this to see if it gets any better. It seems like it might be best if I just left this one alone.

This is Kylak signing out.
Posted by Kylak at 4:40 PM