The Warlock of Dungeons and Dragons 4th Edition is an Arcane Striker that comes in six different flavors. When starting on your journey as a Warlock you must choose a pact that will forever change the fate of your life. Sorry, no refunds. As of the time of writing this, there are six pacts: Infernal, Fey, Star, Dark, Vestige, and Sorcerer-King pacts. I could blabber on for days about the list of pacts and if you really want me to do that then comment below and vote for it.

Before we delve any deeper into the rabbit hole, let me warn all adventurers: this class takes effort. If you don't put the extra time into the mechanics of your Warlock then your character isn't going to shine. Think of this as a challenge rather than a setback. Stoutmeister has a wonderful little chart to explain this (I keep seeing his chart all over the place so now it's your turn): 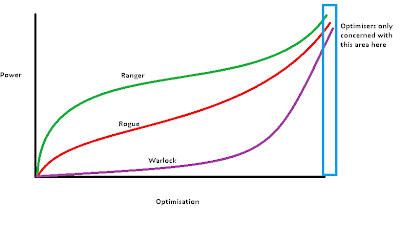 Rangers, Rogues, and Warlocks pretty much all have the same potential but Rangers just happen to be much easier to build. So what makes the Warlock stand out in a crowded room full of Strikers?

1) Controller aspects - Many of the Warlock's powers sacrifice pure damage for lovely effects that will leave your enemies crippled in the most delightful of ways. The skies the limit with a vast variety of effects at your disposal thanks to manipulating arcane magic. There are plenty of AOE effects if you want to be a secondary controller but many powers incapacitate one foe while dishing out some hurt at the same time.

2) Defense - Between gaining concealment (+2 to all defenses) almost every turn thanks to one of your class features and teleporting to get out of sticky situations, you should be rather comfy for a mage. You would think that would be enough. Constitution based Warlocks state they can do far better. These guys take spikes through the chest and ask for more! Thanks to their primary stat being CON, they literally will have Defender level HP and healing surges.

3) Mobility - You get more teleportation powers than any other class and you get the best of the best it would seem. Fey pact Warlocks reap the benefits from this the most. Since most of your attacks are ranged, that in itself is a kind of mobility as you can move wherever you please and frag enemies with magic blasts. 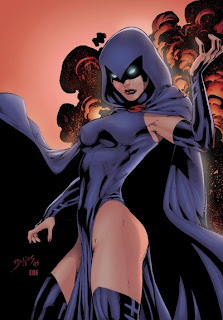 4) Flavor - Making a pact with some mysterious being to grant you power sets up for so much roleplaying potential in and of itself. Not only does your background story suddenly become badass but it can setup your goals and what drives your character throughout the campaign.

5) Combat variety - Arcane blasts, dominating minds, curses, debuffs, teleportation, and a mile long list of other powers. It's even possible to design melee builds. You aren't forced to use the entire arsenal of kick ass but the options are at your fingertips if you so desire.

This is Kylak signing out because I have a pact with Cthulhu and he demands I take care of some other matters for now.
Posted by Kylak at 1:07 PM