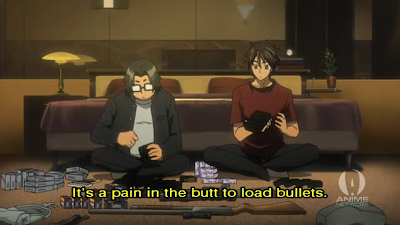 Takashi and Hirano get some buddy time which they haven't had until now. It's nice to see the two main male cast members getting along in comparison to every other Anime where they usually clash or have some kind of rivalry. We also find out how Hirano is trained so expertly in marksmanship. Elsewhere, there is a protest against the blockades the police have set and the police are ordered by the top brass to keep order under any circumstances.

Also, when did this show become such a harem? Every female main character in this show seems to have feelings for Takashi...

Rei brings up Hisashi again and I keep wondering how different the show would have been if Hisashi were alive for more than one episode. Takashi gets rightfully pissed at her constantly comparing him to Hisashi and strangely that causes them to have a moment together... Weird! 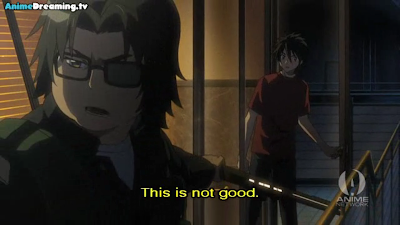 As always, the ending isn't really the ending and there's multiple scenes afterward. That's actually getting kind of annoying because I can imagine the average viewer watching this on TV won't continue to watch after the credits start rolling. The police order construction members to use bulldozers and take out all the zombies on the bridge. Go construction workers! Then Hirano informs Takashi about the shit that's about to get real.

This is Kylak signing out and purchasing a really tall fence since that's all you need to stop a zombie invasion.
Posted by Kylak at 5:33 PM