Wicked Reviews Series: The Legend of the Legendary Heroes - Episode 5 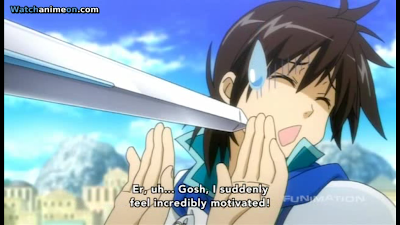 We're in Nelpha this week folks. Their library is so top notch it might as well be the equivalent of the internet for their time period (replace Google with a guy named Toale). That's good news for Ryner and Ferris who are looking for info. Most of our episode however takes place back in Roland as we see what Sion's up to.

Sion's a busy bee with piles of paperwork, research on every single person under the sun (the guy knows everyone before he meets them, I swear), avoiding plots against his own life and the lives of his friends, developing his plans for world domination, and stressful parties. You think prom night sucked? Imagine dealing with royalty and knowingly inviting the very people who want you dead. Yeah, it's kind of a big deal.

There is quite the bit of character development for most of the main characters in Roland and a touching moment that I'll just let you watch. It's not my job to spoil major scenes in the series. I will say that due to this episode focusing on Sion, there is a giant pile of political intrigue and even if you aren't into that sort of thing, if you have a heart at all, you should still enjoy this episode. 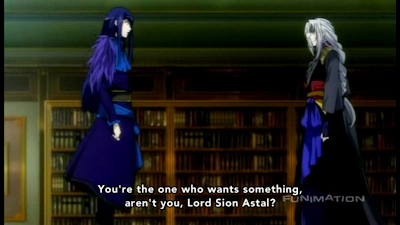 Miran Froaude is finally introduced. He's our resident goth/dark character that lurks in the shadows and all that jazz. He brings Sion an offer he can't refuse and I'm not referencing Godfather and I'm not talking about those deals your mother squeals about at the local Wal-Mart. Sion is quite the troubled soul and Miran offers to help bear the darkness that is currently placed on only two shoulders. Bargain bin priced assassinations being part of Marin's resume lands him the job and the episode ends with Sion doing his best Gendo impression (it's not a very good one since it only lasts for a second before the credits start to roll).

This is Kylak signing out and bringing you the latest Anime reviews around! And by "latest" I mean literally a week late and not the other definition of the word.
Posted by Kylak at 6:13 PM