Wicked Reviews Series: The Legend of the Legendary Heroes - Episode 6 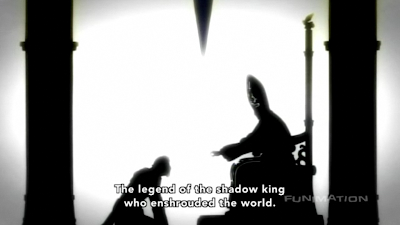 Everything is on the line as Sion purposely walks right into the anti-king faction's trap with the most untrustworthy guy possible as his guard. Sion has proven to us plenty of times already that he's a heavy risk taker and I can only imagine it's going to get him into deep shit at some point. While Sion visits Nelpha, he decides to drop in and see Ryner and Ferris. I personally would love more scenes like this as we rarely get to see the three main characters in the same room.

Skipping ahead, Frouade assassinates just about everyone and their mom and then takes it upon himself to head to Toale's place. Ryner and Ferris face off against our resident goth to prevent him from killing Toale. Frouade gets to show off a decent variety of powers here as it would seem he has complete control over shadows and darkness. Long range blasts, an orb-like shield, a giant construct, teleportation, and the ability to be extremely antisocial. The thing that scares me is that Frouade can hold his own against both of them working together without any trouble. Ryner pulls a bluff that gets Frouade to leave and Ferris rests due to her injury. 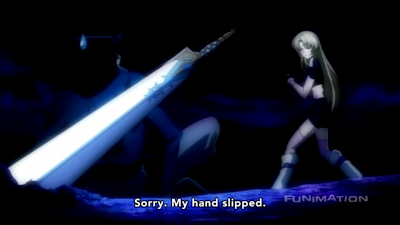 Since no one has made a comment of which they prefer, I'm sticking with doing much shorter Anime reviews for now so I'll be stopping here.

This is Kylak signing out and thinking Frouade makes himself seem way too openly suspicious.
Posted by Kylak at 4:17 PM