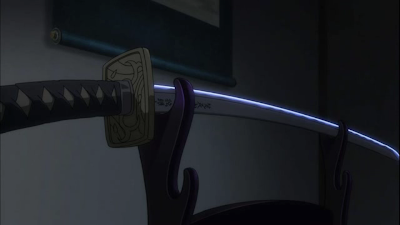 Most of this episode involves Masamune struggling with the losses he's endured and a few flashbacks to show more of the bond between Masamune and Kojuro. I'm still wondering what it is that made Kojuro so loyal in the first place. I hope we get to that at some point this season.

Hanbei pulls a dick move to try and trick Kojuro into believing that Masamune is dead though it's not a very good plan. I mean, it's just one of the six swords... it doesn't really prove anything. I doubt Kojuro will fall for this lame attempt. Then the plan becomes complete fail because he just leaves Kojuro alone in the room with the sword... It's like begging the guy to escape. 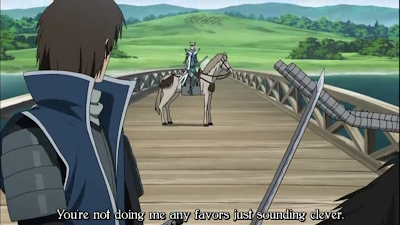 Keiji makes his attempt to talk to Hideyoshi but is ultimately ignored. Poor Keiji, that's twice he's been ignored by those closest to him. Scenes switch over to Yukimura who worries that he's neglected his duties due to Hideyoshi's army already having caught up with his current position. Then Masamune and Kenshin have a quick chit chat.

The episode ends with Chosokabe currently on the winning side of things against Mouri. Mouri remarks how useful Fugaku (Chosokabe's floating fortress) is and that seems like some grim foreshadowing to me.

This is Kylak signing out and thinking a moving fortress on the water with multiple giant cannons is pretty useful too. No shit Sherlock!
Posted by Kylak at 7:03 PM