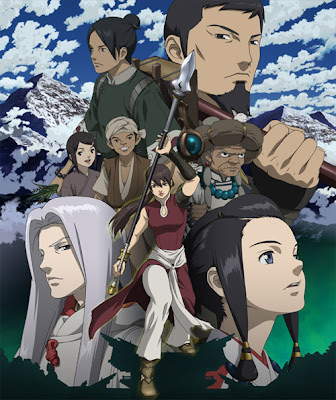 Premise:
A wandering female bodyguard attempts to atone for the eight deaths she feels are her own fault by saving eight lives. Due to certain circumstances, the eighth life she must protect will be the most difficult. She's charged with guarding a young prince who is being targeted by the royal family due to a water demon that resides within his own body. If he isn't killed, a permanent drought will fall upon the world.

This is an Anime that can truly stand for itself amongst the crowd and deliver quality in every category. The full spectrum of animation, visual style, dialogue, story, and beyond is truly top notch and there's a very obvious reason why so much effort was put into this. Below are some of the major points that stood out to me personally.

1) Decisive thought - Something that shines throughout the entire series is that every character makes well crafted decisions. These characters use their intelligence and act more human than in most other Anime. Plans are calculated and choices are weighed before taking action.

2) Proper portrayal of women - The main protagonist, Balsa, manages to be a truly inspiring character. She's strong willed, mature, intelligent, and heavily skilled with a spear. It's so refreshing to see a real woman that isn't a princess in need of rescuing. It also helps that there is never a moment where Balsa is degraded to being used as fanservice.

3) Morality - There literally isn't an evil character to speak of. The best example is probably the King himself. He loves his son but he feels obligated to the people to carry out his duty as King and save them. It's a delightful change of pace to see both sides of the conflict attempting to do what's right.

4) Action - While the fight scenes themselves are few and far between, they are utterly spectacular.

I apologize for not reviewing this in my typical fashion but there's always next time.

This is Kylak signing out and letting you take care of the rest.
Posted by Kylak at 6:54 PM