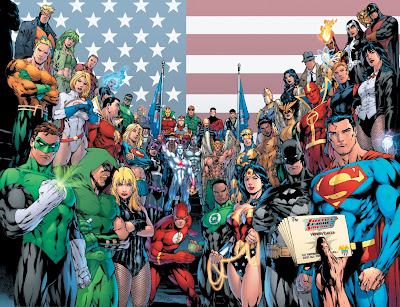 DC Comics is hitting the massive red reset button. Not to be confused with the panic button since this has been well planned and thought out. In September, there will be 52 new #1's written by Geoff Johns and drawn by Jim Lee (both are legendary and this is their first time collaborating). Redesigns and a younger continuity for "today's audience" are what's in store.

The major bonus is that they'll be releasing the print version simultaneously with the digital version. Now you have every option available whether you prefer the real comic in your hands or if you prefer the immediacy of a single click.

Why are they doing this? For the obvious reason of drawing in new readers. With the entire universe being reset, anyone can get into these comics. This is your biggest chance to dive into the DC Universe and not feel that it's a daunting task to keep up with what's going on.

About the only bad news to come of this is the mixed feelings of how certain characters have grown over all these years. Since the first issues aren't out yet, I'm not passing judgment until I see what direction they're taking with this. I imagine they have a very legitimate reason for what they're doing and they surely have thought this through so let's wait and see.

I recommend this to anyone who's ever been curious about comic books and the DC Universe (Superman, Batman, Wonder Woman, Flash, Green Lantern, Aquaman, Martian Manhunter, Green Arrow, Booster Gold, Black Canary, Hawkgirl, Question, Huntress, Doctor Fate, Power Girl, Captain Marvel, The Teen Titans, and a hundred others I can't be bothered to list).

This is Kylak signing out and spreading the word.
Posted by Kylak at 5:02 PM