MTG Tips #4 All about Card Advantage What is card advantage?
In its simplest form: Card advantage means having more cards than your opponent.

Example: Divination draws two cards. You had to play and lose 1 card to draw 2 cards (+2 cards but -1 to get those cards). That means you managed a net gain of +1 card advantage. If you're not a fan of math then don't worry, there's only one more example below that uses any. Hurray!

Common misconceptions:
Spot removal spells (like Doom Blade) and counterspells don't actually generate any card advantage. These spells are useful for utility but they translate into: trading one card for another card. This is the main reason why filling your deck with spot removal is a horrible idea.

Milling also doesn't generate any card advantage. It doesn't get rid of cards that are actually available to the player such as cards in hand or on the field.

Why is card advantage important?
It wins games. It's one of the single most important factors when you're playing Magic. Never underestimate it.

Ways to generate card advantage:
1) Drawing cards
This was already implied earlier but drawing extra cards is the easiest way to gain card advantage. Nothing left to see here. Moving on.

2) Discard
Discard is the exact opposite of drawing cards in terms of card advantage. Rather than giving yourself more tools to work with, you're taking away the tools of your opponent (and tossing those tools in a deep chasm).

3) Field advantage
This one is a bit more complicated. It depends on how many permanents you have on the field and how useful or powerful those permanents are. Having two 7/7 creatures is more beneficial than having four 1/1 creatures. Much like a single Gundam versus twenty Zaku. 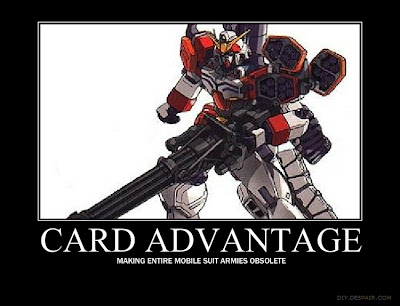 6) Planeswalkers
Imagine being able to cast a powerful sorcery every single turn but you only had to pay for it once. That's basically what Planeswalkers are. Even better still is the fact that they typically have abilities that also generate card advantage such as drawing cards, forcing discard, or creating creatures. There's a reason that Jace, the Mind Sculptor is the greatest Planeswalker ever printed and needed to be banned.

This is Kylak signing out and making more demotivational posters that don't work out of context.
Posted by Kylak at 10:18 AM