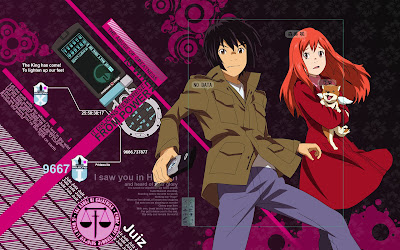 This is one of those Anime that's extremely difficult to discuss without spoiling half of the series as there are plot twists around every corner and the characters themselves don't know what's going on or what has happened so needless to say, you aren't going to get much out of me here but I'll try my best. This will be less of a review and more of an intro to get you excited about the series. At the very least I'll say up front that I highly recommend buying this series as it's a top notch story about intrigue and trying to change the future. It's loaded with quality and the best part is you can watch it again and again thanks to learning new information each time you see it. You can't go wrong here.

Saki Morimi (the girl in the above picture) happens to be visiting Washington D.C. and runs into Akira Takizawa (the guy next to her). This would normally be a rather boring boy meets girl scenario except he's completely naked with a cell phone in one hand and a gun in the other and to top things off: he has amnesia.

From the beginning, Takizawa is being stalked by a mysterious man who carries the same cell phone. The phone itself is able to be used as a credit card with a ridiculous amount of cash as the balance and it can also connect to a woman known as Juiz who can carry out tasks using the cash on the phone.

The story progresses as Takizawa and Morimi attempt to solve what's going on around them as they uncover secrets about a terrorist plot, a group of naked NEETs, the plans of other cell phone holders known as Seleção, the identity of Juiz, and Takizawa's past.

The Anime itself consists of an eleven episode series and three movies. The first movie (Air Communication) is a compilation of the original series with added commentary from the characters as they look back on the events that occurred. I can't stress enough that you shouldn't watch this movie until after you've seen the series as it seems to give away spoilers as the story unfolds thanks to the commentary. To top it off, it jumps through the events and skips vital details. I can't even recommend Air Communication to those who've just finished the series either as it isn't anything more than a compilation of what you've just seen. It seems to exist solely for those who want a refresher if there was a massive time gap between the series and the movies. The other two movies are sequels to the series.

This is Kylak signing out and wondering what you would do as a Seleção.
Posted by Kylak at 10:12 AM