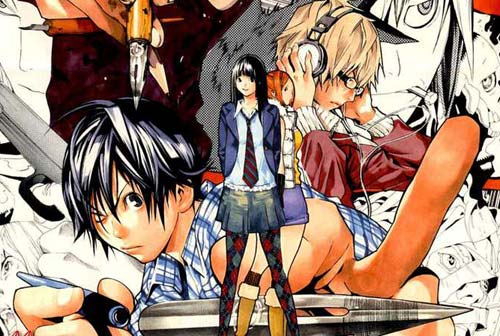 NOT TO BE CONFUSED WITH BAKUGAN WHICH IS A PILE OF SHIT!

This Anime was actually made by the same duo that gave us Death Note. It’s the same level of quality but with a light-hearted story of two best buds who want to make Manga together.

What rocks?
-One of the biggest reasons to watch this show is getting an inside view into the Manga and Anime industry itself. It’s incredibly interesting to see just what it takes to make a Manga from step one to completion as well as what it takes to even get a foot into the industry.
-There’s romance in the air as both main characters have their own girl troubles to deal with and since their female companions are the other two main characters, you'll get plenty of story from their perspective as well.
-The cast is full of lovable characters. Even characters that seem completely obnoxious at first will throw you for a loop and turn into characters you can't wait to see more of as you cheer them on. Nizuma is a perfect example of this.
-Since the characters are primarily Mangaka, they have to create manga titles right? Well that’s another strong point of the series. All of the manga ideas actually seem like titles you would want to read and the glimpses into them show a range of styles and stories that make you appreciate the series (and Manga) that much more.

What sucks?
-It isn’t finished! The Manga is still ongoing and the Anime will get another season but for now there’s a break.
-I suppose you could possibly maybe sorta kinda complain that the plot takes some time to build up but I think that’s kind of the point. It feels more realistic that it takes so long to get where the characters want to be which is when things really heat up so I can’t actually consider that something to put into this section while others might argue for it.

This is Kylak signing out and always looking for artists to team up with much like Takagi.
Posted by Kylak at 10:40 AM