This is the second article in a series of D&D roleplaying articles. Check out part one here:
http://www.allgeeksrejoice.com/2010/08/reverse-dungeoneering-2-encouraging.html

Many moons ago, a group I was DMing for had asked for assistance on creating a more developed character for roleplaying. To help them out, I created this character template sheet. Essentially, it asks the types of questions you should be asking yourself when making your own D&D character. It's designed to simply direct you in constructing a fleshed out character. You don't have to fill it out to completion but being able to answer these questions about your character can help spark ideas you may not have thought about or guide you through things you may have overlooked.

How do they feel about:
Love:
War:
Religion:
Death:
Other races:

3 people in their life (allies or enemies). 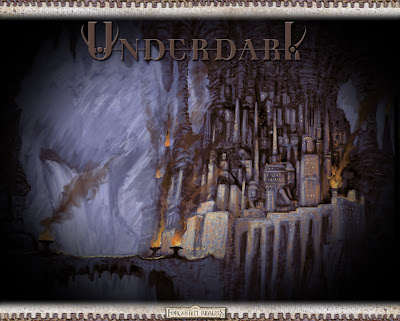 This week we're diving into the Underdark. I swear it's not a double entendre.

31) A Drow cleric takes over a kingdom and she attempts to create a new matriarchal society on the surface.
32) A Drow slave seeks refuge but some are suspicious of his actions.
33) The King needs an antidote for his illness but it can only be made from the fungi found in the Underdark.
34) A Beholder Hive Mother has gathered enough of its kin to take over a Drow city. The Drow reluctantly seek help to take their city back.
35) The group confronts an Illithid (Mind Flayer) only to find it has the same mannerisms as an old friend of theirs.
36) A duke has captured an Aboleth to obtain secrets of ancient times before Gods and he stumbles upon something horrifying...
37) An Aboleth and its offspring have escaped into the Astral Sea as they attempt to make it their own.
38) The Duergar have nearly finished constructing a massive dungeon but for what purpose?
39) A small Drow city has started an uprising by overthrowing their matriarchal society.
40) The group nearly dies of starvation in the deep catacombs of the Underdark only to be taken in by the Svirfneblin.

This is Kylak signing out and hoping you don't get lost in the Underdark. Seriously, it's not a double entendre.
Posted by Kylak at 11:36 PM

Video Spotlight #41 The Legend of Korra

This is Kylak signing out and bending things.
Posted by Kylak at 4:28 PM

Jaden Yuki (Abridged version) voiced by ShadyVox (Blake Swift). Above is a collection of Jaden's greatest hits. If you haven't watched the Yu-Gi-Oh Abridged series by now then you're missing something in your life. Link: http://www.yugiohabridged.com/

This is Kylak signing out since Shady could have done it better.
Posted by Kylak at 5:12 PM

This is the tale of a lost soul who's forced to wander the stars of his mind in the hopes of finding meaning in what's left of his existence. A failed attempt at seeking redemption for his actions resulted in his current state of being. Or he's just a very bored cat. You decide!

This is Kylak signing out and hoping this cat finds what he's looking for.
Posted by Kylak at 4:20 PM

Words aren't needed for something this artistic. It truly speaks for itself.

This is Kylak signing out and leaving you with the brilliance of this video.
Posted by Kylak at 4:15 PM

Egoraptor does it again! Here's a link to the first if you missed it: http://www.allgeeksrejoice.com/2011/07/video-spotlight-34-sequelitis.html
Egoraptor walks you through major elements of video game design while keeping you in stitches (that phrase still exists right? I'm not too old am I?) during the entire video. Megaman X is still one of my favorite oldschool games as well so it's great to hear his praise while he also points out how modern games have lost touch with many of the lessons this game taught. Curious as to why this game is freaking brilliant? Then press the play button already!

This is Kylak signing out and hoping Egoraptor blows your freaking mind!
Posted by Kylak at 5:32 PM We've been apart from one another for far too long. It's simply criminal I tell you. How are you by the way? College is ever so close to the end. I can taste it. Mid-December marks the point where we can all celebrate with explosions or whatever your preference is. I'm not all that picky.

I'm still working on posts like a madman and quite a few other projects as well but we'll save those for later. What's important is the now. To get things going, I'll be posting several Video Spotlights. I figure it's better than not updating at all and I've got a massive backlog of the things to post as it is. Major articles and other things will be posted as soon as possible.

If you have any other suggestions for quick little posts that you'd like for me to write in the meantime then please do share in the comments below.

This is Kylak signing out and going back into the mines to toil.
Posted by Kylak at 7:01 PM