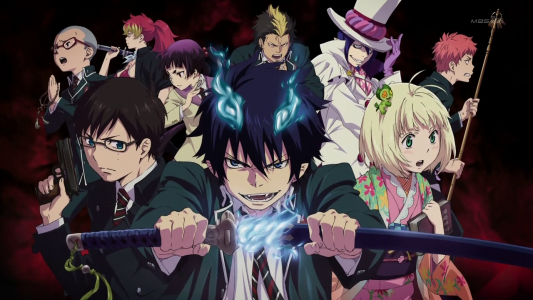 What's it about?
Rin Okumura has always struggled at finding his place in the world but his foster father Shiro, a priest, continues to push him forward. Shortly after his twin brother left for True Cross Academy, Rin discovers that he's the son of Satan. After a horrible incident at the Church, as Satan attempted to reclaim Rin from the human world, Rin decides to do whatever is necessary to become an Exorcist like his foster father and defeat Satan himself.

What rocks:
- It has a rather explosive start that really sets a solid foundation for the rest of the series. Laying out those bricks was rather clever instead of the small paper cups some Anime shows expect you to stand on.

- The level of quality for the visuals is incredible.

- This series is full of emotional moments that will tug at your heartstrings and really get you invested in the main character and what he has to go through. Grab those tissue boxes.

- There’s actually awesome filler. In fact, you won’t even be able to notice most of it (Except the god forsaken Squid episode. Freaking shit!) because the filler actually progresses the plot and fleshes out characters the way a normal episode should. This is filler done right.

What sucks:
- Many major characters never really get to shine or even get fleshed out. A primary reason for this is that the manga is still ongoing (still fleshing them out) and half of this show is Anime original content so there wasn’t enough time or source material to work with. You could almost argue that this is a strong point since I’m saying I want to see more of these characters. Also it’s important to note that the ones that do get time to shine are beyond great.

- Even though it’s already finished with only 25 episodes, it’s left open-ended on purpose and while it’s great that they could pick up where they left off, it feels like they’ve concluded all that was necessary with the Anime original ending. So by trying to have it both ways, they’ve shown they couldn’t commit either way and it comes off as half-assed.

This is Kylak signing out because I'm already an Exorcist. No, seriously. My toilet was reeking with something demonic before I flushed it.
Posted by Kylak at 7:54 PM