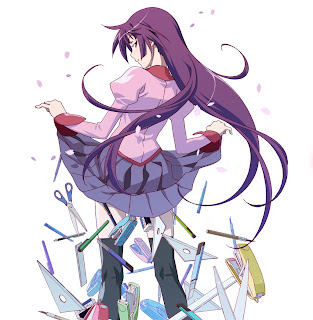 What's it about?
Koyomi Araragi has just recently become a human again after his short time as a vampire. He continues to run into girls with supernatural oddities that affect their lives. Koyomi makes it his mission to help them with their problems but it isn't nearly as easy as it sounds and everyone begins to find what exactly they're hiding from themselves about their lives and what must be done to move on.

What rocks:
- Dialogue.
Ultimately this is a show about characters talking so there’s a lot of focus on the writing. Not only does this allow the characters to be fleshed out more than most characters of other Anime but it gives plenty of time to enjoy the interactions between the characters. You don’t have to worry about pacing either. Thanks to the visual style and the spastic nature of the show, you won’t be bored.

- Aeshetics.
The visual style is rather exciting just to watch. Everything has purpose: the cutaways that flash text on the screen, the art style changing on the fly, the character designs, the luminous effects, and even the environments. Rather than just cutting that thought off, I’ll dive a little deeper but half the fun is figuring it out on your own. Let’s take character designs for example: Hitagi’s stapler is similar to a crab’s claw and Mayoi’s backpack is similar to a snail’s shell. These are physical representations of their oddities (it’ll make sense once you watch it, trust me). Another example is the environments. The locations and placement of different objects all have a purpose such as creating a claustrophobic effect where characters are under pressure or expressing a character’s inner thoughts physically. It's incredible how well-thought-out this is.

- Comedy.
There are multiple layers to this as the show has many flavors of humor: wordplay, puns, shock humor, phrases, parodies (of major character archetypes in Anime), referential humor (referencing other shows like DBZ, Doraemon, and others), and metahumor.

- Romance.
It’s rare to see two characters in an Anime get together near the beginning and work on a relationship as the series progresses. Most Anime have the characters get together at the conclusion so I was glad to see this play out.

- Story arcs.
The show is split up into arcs that revolve around a particular character’s issue. Each of these stories involves a supernatural (vampires, crab gods, demons, etc.) oddity that’s affecting a character. The oddity is always related to something the character is actually going through rather than just being a supernatural problem. For example, Hitagi has become weightless thanks to an oddity but that’s also related to a very personal issue that I won’t spoil. Events in previous arcs still affect later arcs so things thankfully aren’t truly episodic. Each arc also has a different opening related to that character. Not only do the arcs really help the show keep focus but they help create that feel that each of these arcs is a different story much like the title of the show states (Bakemonogatari translates into Ghost Stories).

What sucks:
- The only thing that I could say sucks about this Anime is the very things that make it so wonderful. This show knows what it wants to do and it doesn’t try to please everyone. Give it a couple of episodes but if you aren’t into the feel the show has during that time then you aren’t going to enjoy it at all.

This is Kylak signing out and looking forward to the prequel and sequel coming out.
Posted by Kylak at 4:08 PM