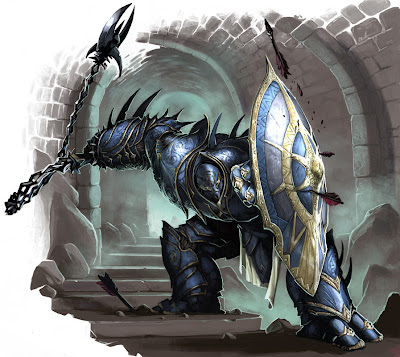 51) Why not lend a hand?
I'm not just talking about helping a struggling player out with the game but also lending a hand in dire situations. There are times where character death might be meaningless or avoidable and you might need to step in and create a scenario for what saves the day or simply lie about your dice and say that you rolled a one. I'm not saying you should dare make the game less difficult than easy mode in a video game or make it impossible for your players to be killed. What I'm saying is that there are times when characters simply don't need to die and rather than just say, "That's how the ball bounces." you should lend the players a little help.

52) Sometimes you can't save them.
Whether it be a heroic moment, a foolish choice, or being incinerated by a dragon's breath, you can't always step in and help them and sometimes their characters have to die. Always remember that their characters are important to them but that you have to know when to draw the line.

53) Always give at least three ways to solve something.
I say three but honestly the number isn't what you should be paying attention to. Make sure that every scenario can be solved in multiple ways and be open to suggestion because the players might have thought of something you never imagined.

54) Don't be afraid to say no.
There are some Dungeon Masters that are complete pushovers and won't setup a challenge for their players. I know they're your friends but that doesn't mean you have to say yes to everything. Learn to say no and don't regret it.

55) Don't say no too quickly.
On the opposite end of the spectrum is the close-minded Dungeon Master that won't accept any idea that he (or she) didn't think of. Don't be that guy (or girl). Seriously think about their idea before you shoot them down.

56) Don't be afraid to change your mind.
There are many reasons that some people are afraid to change their mind. It could be stubbornness or a fear that they might be admitting they were wrong or made a mistake. Don't become so rigid as a person that you refuse to change your mind or you'd be surprised what horrors it can lead to. I've seen groups disband because the DM was a stubborn mule. There's a reason they say that pride is the father of all sins.

57) Work with what you've got.
You might think that you have a certain shortcoming that makes you a terrible dungeon master. I'd say to test out what strengths you do have and utilize those instead. For example: you don't have to be intelligent to be a great dungeon master. If you know how to generate fun then you're already a step above the rest.

58) You're only one person.
You can't be expected to do everything. You're only one human being and it might be a great idea to hand out tasks to your players so you don't put too much weight on your shoulders. Don't create unnecessary stress for yourself.

59) Clarify in-game and out-of-game.
It's crucial to have a system setup for when you or your players are talking in-game or out-of-game. I've known some players to hold up their hands as moose antlers while talking out-of-character. I personally go heavy metal on everyone and throw up the horns. Just figure out something that works for your group or things could get confusing.

60) Great ideas are meaningless by themselves.
This is a pretty harsh lesson to learn but everyone has ideas and even a great idea can be utterly meaningless. Is it a great idea that you can elaborate upon that's more than a simple gimmick or fun premise? Is it feasible within the game and within time constraints? Does it actually get everyone excited and make them want to test this out? Are you able to execute it in an interesting way? Now you have something. I'm not saying those are the only ideas to ever dare utilize but it's a thought experiment to ponder upon.
Posted by Kylak at 1:44 PM