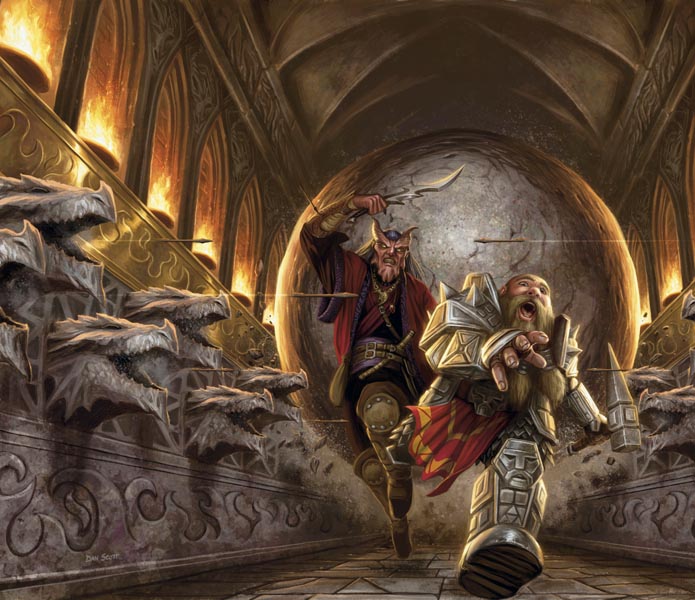 71) Avoid the grind.
Is your campaign consisting of nothing beyond kicking the door in and slashing up goblins and dragons? You may want to implement other things beyond combat such as roleplaying, puzzles, politics, mystery, exploration, or any number of things to add depth to your game. There's a lot more to D&D than just combat.

72) Encourage roleplaying.
I've already written an entire piece on this so I think I'll just leave a link here for you: Encourage Roleplaying.

74) Explain roleplaying.
This is something I was tempted to write an article about but it may not be necessary. It's very possible that there are those that can't see the inherent wealth in what roleplaying offers a group. There is nothing wrong with that. It's important to attempt to explain the benefits and I'll give a brief attempt here for a moment. The best experiences I've had in D&D were intense or hilarious scenarios that only came about because we were taking on the roles of entirely different characters at the table. Roleplaying has made fights more interesting, character interactions a million times more exciting, and has setup entirely new events in the campaign that were unexpected on all sides of the table. That being said, you should never force someone to roleplay that doesn't want to. It's not for everyone.

75) Give combat a purpose.
Why are they fighting these random wolves in a forest or the 30th group of kobolds in this dungeon? Are you just padding the time of the adventure by throwing meaningless fights at the group? Try to give the majority if not all of the fights a reason or at least a goal behind them. Throwing a battle in for the sake of having combat isn't really worth it.

76) Throw surprises.
I'm not just talking about elaborate or clever plot twists. When the players are in a room filled with five enemies, you've set expectations and clearly defined the parameters of what is going on. What if one of the walls or part of the floor suddenly collapsed? What if someone or something interrupted the fight for better or for worse? What if a creature rushed toward one of the players but fell prey to a trap in the room? Even simple little surprises here and there can really spice things up.

77) Turn the terrain into an encounter.
You can turn an entire dungeon into a set of traps, puzzles, and skill challenges. You can also turn a forest into a massive encounter as the party attempts to survive the natural (or unnatural) elements.

78) Give your settings some flavor.
Why make it a normal boring dungeon when it could be submerged underwater or built underground where earthquakes have affected the layout. If you need more examples then I suggest taking a look at this: Story Seeds: Dungeons

79) Don't mistake elaborate descriptions for great storytelling.
There's a common phrase that writers are taught known as "show don't tell". Exposition of characters explaining everything to the audience isn't the best route to take. It's not always easy to pull this off in a game where you have to describe things to the player on the spot but it's still something to consider.

80) Conferences are useful.
If you aren't having meetups with your group to plan things out together or throw ideas around then you should seriously start as soon as possible. You can figure out what they are enjoying or hating about your campaign and improve upon things drastically and immediately. You can plan conferences or group discussion (whatever you want to call them) to take place before or after a session or even schedule a separate day for them. Make use of this.
Posted by Kylak at 1:13 PM