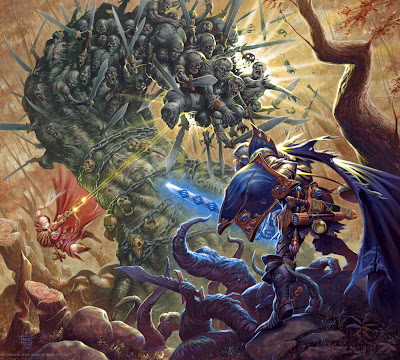 81) Learn how to avoid metagaming.
You'll need to understand what metagaming is and how to avoid it. I've got a link for just such an occasion: How to Avoid Metagaming

82) Understand when metagaming is acceptable.
Metagaming doesn't need to be seen as a solely negative thing that plagues the game. Here's a link for that as well: When is Metagaming Acceptable?

83) Utilize e-mail.
We live in the technology age and you'd be surprised how often people aren't utilizing e-mail. You can save time during sessions by rewarding exp through group e-mail, having your conferences there if your players lack free time, and hand out attachments with character sheets or other odds and ends.

84) Setup a schedule.
Setting up a schedule is pretty crucial to a game. Having a set day of the week to meet up builds excitement, keeps everyone in the loop, and makes it easier to plan around the game. There is nothing wrong with having to break off a scheduled day for something even semi-important because you at least have a day in the first place to reschedule. This is a pretty crucial first step that some groups ignore.

85) The schedule isn't law.
I already made mention to this but people have lives outside of the game. For some people, D&D isn't even important to them. They might play simply for the social interaction. There's no reason to give them grief if they make a mistake and forget several times what day your sessions were scheduled for. Just relax and remember that everyone has different priorities than you do. Keep inviting them into the game if you enjoy their company and maybe they'll eventually put it higher on their priority list.

86) Test out cutscenes.
Can you imagine how disappointed everyone at the table would be if they finally got to face and defeat the major villain they've been dealing with for months in the campaign only to have him just fall over and bleed a little? That moment would be pretty terrible without something remotely interesting to occur afterward. Now given, cutscenes have their place but be careful how you use them. Players despise it when things are literally out of their control or their characters are forced to do something they wouldn't.

87) Don't forget gameplay.
Don't let cutscenes and roleplay rule the day unless everyone is prepared for that kind of campaign. Gameplay is kind of the core of what makes a game and without it you're not really playing a game anymore.

88) Make new players feel welcome.
New players often face a lot of pressure. There are certain expectations at the table from every player and you have to do your best to lower those expectations. The new player should only be expected to try and even then they should only be expected to try some of the time and with lots of help. You should make them feel at ease and be forgiving of mistakes. If the group is giving them a hard time then stick up for them and partner them up with someone who can look after them.

90) Avoid information overload.
The players are being bombarded with names and descriptions of characters, places, items, and other things. You're handing them plot points, quests, and things to keep track of. They're being told new information in a strange world with rules that work outside of our own reality at a constant rate. Try not to give them too much to think about and stay away from dumping info about several things on them.
Posted by Kylak at 1:35 PM