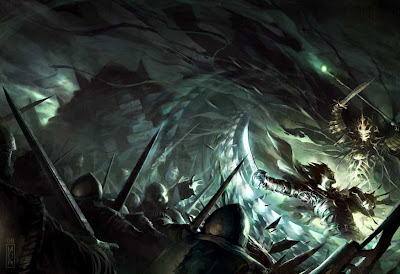 91) Leave your issues at the door.
Don't bring any issues you have to the table. If this literally isn't possible then think about cancelling and rescheduling the session rather than trying to get through it for the sake of everyone else. Not only is it better to have no session at all than attempt to go on but I'm sure your group would prefer you take care of yourself before you try to continue with the campaign.

92) Listen.
The concept of what listening even means anymore has been lost. Almost everyone was taught even at a young age by their parents to listen before speaking but I imagine that it never really clicked. Everyone is so eager to shout off what they have to say and not eager enough to not only hear someone else's words but internalize them, understand them, and ponder those words in a perspective other than their own. Listening is one of the single most important skills for a good DM to have. It can make or break you. This is also an important skill to have in the real world that just so happens to transfer over to this particular game.

93) Learn from your mistakes.
You are totally allowed to make every mistake imaginable as a DM. Don't let anyone tell you otherwise. I myself have made plenty of the mistakes I've listed here on this very list. No one is perfect. The important part is growing as a person and as a DM. No one starts as a great DM and it takes a lot of work, time, and effort to get there. Some players aren't even that forgiving if you are to make a mistake and that's a real shame because it's always easier to see things on the other side of the table. Being a DM means you're always put on the spot and your every movement is scrutinized. It's a terrible feeling and I realize our society doesn't help matters when we're practically enforced to pick apart or make fun of any mistake someone else makes so it makes it that much harder for us to accept our own mistakes or just accept the fact that it's okay to make mistakes at all. I just realized that this should probably be turned into a full article so we'll save the rest for another day.

94) Experience life.
The more you experience in life means you'll have that much more to bring to the table. Someone with even minor knowledge of architecture can design a better and/or more convincing dungeon. Taking an actual walk through a forest one day could generate a new game mechanic for when the players are on their next adventure and in a similar scenario. Watching an obscure movie might bring about a dozen ideas to try out in a campaign. The list could go on but I think you get the point.

95) Be flexible.
Open-mindedness wins the day. Adaptability is a strength that all humans share and there's no reason to kill that wonderful trait by being close-minded, thinking your assumptions are facts, daring to believe you're always right, or being resistant to change.

96) Don't force involvement.
Every player is going to have a different level of engagement when they come to the table. Some players might even show more or less engagement depending on what's taking place in the game or outside factors that you don't have control over. It's wonderful having a great player at the table that's ready and willing to try anything and is always pushing the envelope when it comes to roleplaying, combat strategies, thinking outside the box, and more but not every player cares enough or is prioritizing things the same. Remember that fun is subjective and their fun might be simply the social interaction the game offers. Don't force your players to get more involved than they want to be.

97) It's not an ego trip.
Don't turn your role as a DM into an ego stroke. Don't be that person. You're not innately a better human being just because you think you're a great DM. Your shit doesn't smell better than anyone else's. Learn to get your ego under control because it shows when you don't and it leaves the worst taste in everyone else's mouth.

98) Honesty is the best policy.
This is a bit more complex than simply saying, "Don't deceive your players." Being open and honest about your campaign will make all the difference for your players. I'm not saying to be so open that you spill the beans on what will happen next in the campaign but you want to avoid pulling the rug from underneath them. The players are giving you a lot of trust by being in your campaign so you have a huge responsibility to take care of.

99) Learn to be a better person.
Plenty of people level up their brawn by exercising and more than ever there are people leveling up their brains by furthering their education with College but something many of us are guilty of is not gaining any exp in being a better person. This isn't an easy thing to learn and you should never settle with thinking you've already finished that game. It's a game that never ends (much like exercise and education).

100) Communication is key.
D&D is a game that involves multiple people and their interactions with one another. Communication is key to any relationship (whether that be a relationship between strangers, friends, couples, or whatever else) and this still holds true in D&D. Learn to effectively articulate your thoughts, ask for clarification more often to be assured you're understanding someone else's words, learn to listen, attempt to be as empathetic as possible, try to assume less, don't judge others, realize that you might be wrong, and the list could go on but we don't have all day. This is one of those other "single most important skills" a DM needs. This is easily at the top of the list but it's also one of the hardest to even gain a grasp of, much less be fluent with.

101) It's just a game.
I've stressed this several times throughout these tips but it deserves repeating. If you're not having fun then you might be doing it wrong. The ultimate aim in a game is to have fun after all and if D&D becomes more work than play then it might be time to re-evaluate things. Remember that the only people that should be making D&D a top priority are the people actually making the game over at Wizards of the Coast. Your job, friendships, and life don't depend on this game. It should take a backseat to almost anything else.
Posted by Kylak at 1:51 PM