When building a deck, there are certain cards to be wary of that might as well be traps. Admiral Ackbar isn't here to help you since he's in a galaxy far far away so I'll be his temporary replacement. The two particular types of cards we'll be looking at today are "win-more" and "lose-less" cards. A win more type of card is one that is only truly useful when you're already winning the game. These are essentially traps because they look powerful and shiny at first glance and make you want to drool on them and include them in your deck when in reality you could be putting a more useful card in that works 100% of the time (rather than less than 50%). The hardest part is deciphering which cards would qualify for this award and you'll find that it's rarely black and white. It usually comes down to looking at your own deck and making that decision for yourself.

You may have noticed Dragonstorm hangs above to wave the banner of win more cards everywhere. This is a card that costs 9CMC and loves to brag about how explosive it can be "potentially maybe in a vacuum on a Tuesday if it doesn't rain". You could have played a powerful dragon on turn 5 or 6 and have been swinging with it and winning before you got the mana for this bad boy. Let me repeat: you could have already won. That's not even mentioning that it will actually cost you more than 9 mana since it wants you to play cards before it thanks to the storm mechanic.

Before the pseudo-tournament players jump on my back, you have to understand, the reason I use Dragonstorm is it's also the perfect example of an exception to the rule thanks to it working in a very very particular deck. Tourney players will tell you of the days of the Dragonstorm combo that could cast Dragonstorm on turn four consistently in Standard and summon four Bogardan Hellkites to instantly win the game. As I said before, it's never black and white. Dragonstorm is going to be a terrible card in more than 95% (totally accurate made-up statistic right there) of the decks that try to play it because they could have been playing an actual consistent card that had a better effect for a cheaper cost. That being said, the Dragonstorm combo deck had all of the right pieces to abuse the storm mechanic and the only reason it was successful was because of how fast and consistent it was. It was the backbone piece of a single combo deck but for everyone else it's just a win more type of card. A lose less type of card is a bit different but I'd say it's easier to spot. These types of cards are at their best when you're losing the game. They never actually help you win the game which at best means you're only delaying the inevitable and at worst you're bringing a knife to a gun fight (maybe a Jellyfish to a Dragon fight?). The hardest part that some players have in figuring this out is those that are still learning about Control decks. Control decks don't use cards that simply delay the game. They use cards that control the board in their favor and give them superior card advantage to win the game.

Take a look at Guard Gomazoa. That is some hefty defense right there but it doesn't really do anything else. You could have just as easily included a flying creature that can actually attack. If your opponent pops out a Baneslayer Angel then yes, Guard Gomazoa is going to help you lose less often but it's never going to actually win you the game. Baneslayer Angel on the other hand is going to win a lot of games and generate more virtual card advantage by being a better threat on the table than any jellyfish.

Compare this to Wall of Omens. It's one of the only walls that has been used in tournament play in quite some time and there are actually a lot of reasons for it. It manages to replace itself immediately with another card which lets you dig deeper into your deck to find your actual threats, it's below three mana which means you can drop it at the most crucial time to place a wall (the first couple of turns), and it has four defense which not only means it's out of Lightning Bolt range but it blocks just about anything for quite a few turns. It combines card advantage and virtual card advantage (if you don't know what I'm talking about then read this article: All About Card Advantage) into one tiny cost-efficient package.

Just to clarify so that I don't send the wrong message: it isn't walls that are the problem. Cards that simply delay without giving you any kind of advantage in the game are the real trap. There are plenty of great walls that do more than just "exist" on the field and there are more than enough non-walls that are about as useful as a dead body.

Ignore the traps my friends.

This is Kylak signing out and helping you bring the right weapons to the table.
Posted by Kylak at 2:56 PM 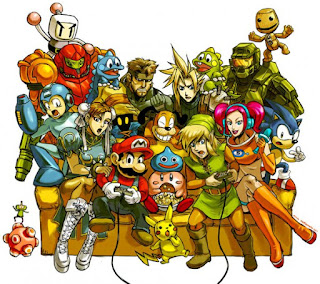 For those not getting the low down on the down low, there happens to be info about a new PS3 title known as Playstation All-Stars Battle Royale. It's essentially Super Smash Bros. for the Playstation. If you've never heard of Super Smash Bros. before then I need you to hit yourself a few times. No fibbing. I'll be able to tell if you're lying. That being said, today's discussion isn't about the game itself but rather something that I've been churning in my head for awhile (churning is the secret word of the day so expect the room to start screaming at you). Today's topic is about characters. You see, for me personally, the character(s) of a video game can sometimes be just as important as the game itself (if not more important at times). Sometimes I feel like I'm alone in this but then I simply have to look back at the existence of Super Smash Bros., Final Fantasy Dissidia, Kingdom Hearts, Marvel VS Capcom, and other crossover titles and realize that others are in the same boat as myself (now with open bar... and I don't even drink). That's not even considering characters that have their own on-going franchises by virtue of the character alone. Some of which will never die. Never die....

Something that I couldn't quite put my finger on for this console generation has been the sheer lack of character. Nintendo has actual iconic characters it can leverage that stick with us until the end of time, the Final Fantasy games that still existed in the single digits have characters we will forever love, and Capcom to its credit has built up entire universes and mythos around its major characters that have already become household staples. The list can definitely go on but let's face it: this current console generation has barely provided any new characters for us to latch onto. There's a reason we still want Ratchet and Clank games (and it's not just the gameplay).

I can't help but think this directly relates to the DMC reaction, even if I hate retreading that ground for the millionth time. Dante is a real character. He's already made himself iconic among fans and non-fans and the Dante shown in the DMC trailers isn't the same Dante. He's some Bizarro version where fun is replaced with angst and his need for parties is replaced with a nicotine addiction. If the character wasn't so loved, the game would have never received that reaction.

Rather than actual characters, there has been a shift in focus on three things for this generation: gritty realism, the player being the character, and sequels of sequels. Games like Skyrim don't actually have a main character with a story or dialogue. You're simply the one taking control and everything revolves around your decisions. Even if your decisions just involve you crafting shit for three days in real-time. I'm fine with these kinds of games existing for the people that enjoy that type of escapism but creating actual stories and characters has fallen to the wayside.

When studying story crafting you learn that it's not the actual story that sets a book or other piece of media apart. The real answer lies in the characters and how they interact with one another. The characters will create the story themselves. Their push and pull is what generates the tension and driving elements that make you invested in what is going on. There's a reason Final Fantasy 6 (the actual 6 in Japan but originally our 3 in the States until that was fixed later with the re-release in Final Fantasy Anthology... except for... oh screw it) is still considered the greatest.

So what does all of this have to do with All-Stars (full circle!)? A concern. Does Playstation have enough "characters" under its belt to warrant this kind of game? They did mention there would be third-party characters (that was obvious though) but that doesn't automatically dodge the question. We don't have a finished roster yet but I remember laughing uncontrollably at one of the first names to be made public knowledge: Mael Radec. If you have no idea who that character is then guess what: You're allowed to laugh uncontrollably as well because I imagine there aren't that many gamers that could easily recognize his name either. I'm going to go out on a limb here and say that picking an antagonist from a niche title in only a single game of a series probably wasn't the way to go. That being said, I see why they did it. Killzone is one of their properties and it's not like it gave us any memorable characters to speak of so Radec was probably the best fit (even if he's only from Killzone 2).

Super Smash Bros. Brawl already had 35 characters and there are still hundreds of other characters that players want them to add into the next installment. All-Stars on the other hand may only be the first installment in its own series but can you really imagine such a rich history of characters to draw from for the future? I can see it now already, when the sequel comes out and almost the entire cast is from decade-old franchises and nothing really new to speak of exists. At least it's a better situation than Microsoft/X-box trying to attempt the same thing. Can you imagine that fighting game? The only three playable characters would consist of Marcus Fenix, Master Chief, and the dog from Fable. Who am I kidding? It would just be another multiplayer shooter.

Let's hope the end of this console generation brings back a focus on actual characters in our games. Sadly though, with the success of Call of Duty, Skyrim, and a million sequels, I can't imagine it happening for awhile.

This is Kylak signing out but not losing hope.
Posted by Kylak at 8:50 AM